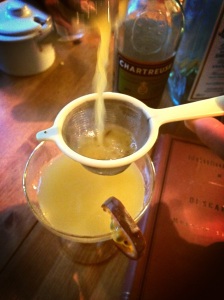 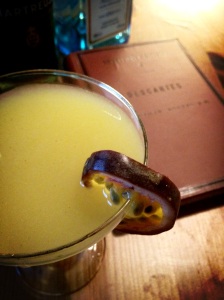 Here is our cock-tale for July. Follow the links to the story, or if you’re impatient,  just skip to the recipe and pictures below.

Passions of the Soul

Most of our readers probably know the late bloomer of a renaissance man, René Descartes. The 17th century philosopher, mathematician and natural scientist is credited for opening the door for both modern mathematics and modern philosophy, and is known to have dabbled enough in optics to come up with the law of reflection. Our cocktail for July is curiously enough named after one of his treatises, and carries some Cartesian qualities.
– – – – –
Descartes was a rationalist, thinking that nothing could be known from senses alone, without the use of reason. He carried this thought over to his moral philosophy, arguing that virtue consists of the correct reasoning over our actions.
– – – – –

A teaspoon of juniper berries
Half a measure of gin

One fourth of a measure of green Chartreuse

Descartes was not without doubt, however. He is known to have professed so-called methodological skepticism, that is doubting everything until arriving at something undeniably certain. This is how he arrives to the conclusion “cogito, ergo sum – I think, therefore I am”. Arriving at this conclusion was not a painless process, and led Descartes to self-doubt and outright fits of solipsism.

Half a measure of vermouth

Neither was Descartes without passions, a man that he was. Hearing that Galileo‘s work had been burnt and Galileo sentenced to house arrest for the rest of his life, he decided to abandon his own work on De Homine, in which he presented an idea of a body functioning independently of the soul; His rational mind would not let him publish the work in a mutilated form, nor would his body let him come to quarrel with the church.

We are, all of us, rational at times, and less so most of the time. Curiously Descartes, although vehemently pursuing means to arrive at true knowledge through rationalising, also, through his ideas concerning the mind and the body made way to anthropocentric and individualistic philosophy, which in it’s turn turned in to romanticism and utter abandon of all reason whatsoever.

Our Summer Cocktail is a homage to Descartes, and man’s ability to rationalise at will, and abandon reason at whim. 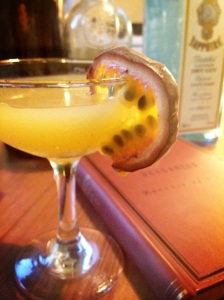 Crush the juniper berries in a cocktail shaker. Add the pulp from the passion fruit. Pour in the gin, vermouth and Chartreuse. Shake well, and double strain in to a cocktail glass. Garnish with fresh passion fruit slice.

The juniper berries will enhance the gin flavor, and the passion fruit adds sweetness, which the vermouth intensifies. The Chartreuse adds body to the cocktail. A cool drink for summer days, pas de pastis.

EDIT: It only occured to me about three years after this post, that the passion fruit and green chartreuse blend in to a color very close to Chartreuse yellow. Go figure.