In the fall 2018, we have our own club at the fantastic Tenho Restobar, with our favourite guest bands and burlesque performers! Oh Sweethearts, this is going to be absolutely magical:  Each evening has a theme reflecting the guest performers’s style of music or choice of subject. We also play a special set that reflects the theme, and new songs are going to pop up by the end of the season. Grab your friends and come see our friends!

Sweethearts! Feast your eyes on these great pictures by Timo Kirves from our gig at Savoy-teatteri, co-starring burlesque sensation Armi Von Vep and featuring Josef Donner! Lights by Roy Boswell and Jere Kolehmainen, sounds (sadly inaudible for now) by Gabriel Herrero! Ah what a night to remember, thank you darlings for coming en masse, thank you for screaming and shouting and sobbing and supporting!

We are now retiring for a small songwriting pause for the summer, be sure to check back for concerts in August! Have a warm, wanton and wonderful summer, Sweethearts, we love you to bits! 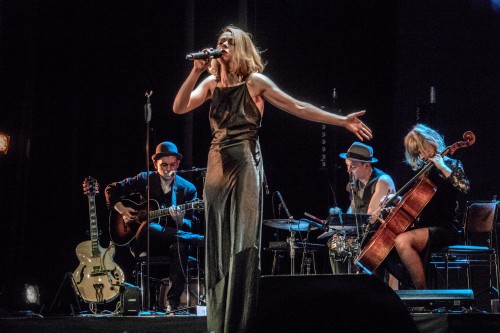 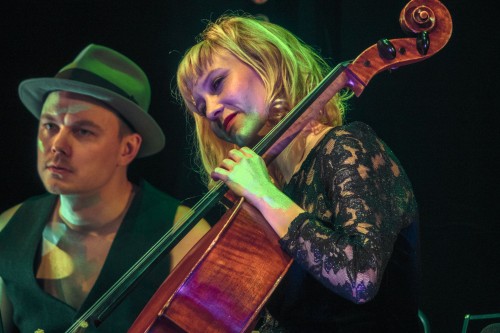 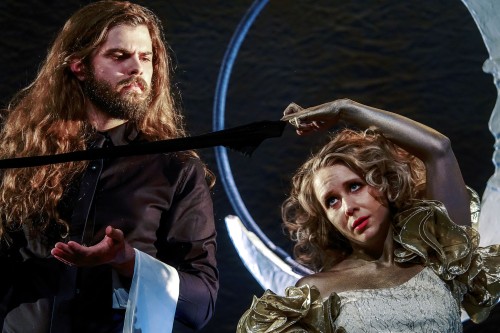 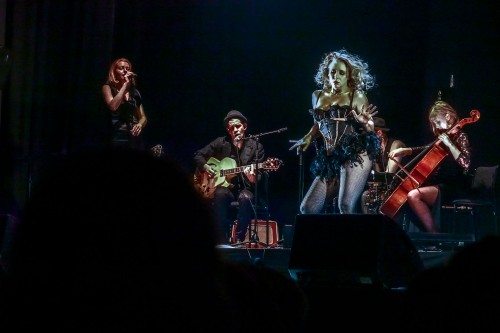 Sweethearts! Exactly one month to go until we take over the stage of Savoy Theatre!  Get you tickets from lippu.fi and tell us you’re coming at the Facebook event (in Finnish)!

Finland’s only chanson-cabaret-dandy-band Café de Abejas was formed in 2011. Their witty, elegant songwriting evokes the spirit of Weimar-era cabaret. The band has released two albums, Mascot Moth (2013) and Is This Casablanca? (2015). At Savoy Theatre they’ll also perform new songs from the forthcoming third album.

Armi Von Vep is a burlesque and performance artist, GoGo dancer, art model and midwife. Von Vep was the 1st runner up of ‘Burlesque Entertainer of the Year’ competition in Berlin Burlesque Week 2016, and is returning this year to perform at the main gala.

We had the most wonderful photoshoot and practice yesterday with the marvelous people of Detritus! There was a LOT of blush involved, but hey – what could be a better way to start a new project than by stroking each other’s faces gently? STILL IN OUR SHADE, our collaboration with these amazing Baroque musicians and dancer Tero Hytönen is to take place in Helsinki on November 20, 2016, so save the date, Sweethearts!

Filed under Inspiration, News, Still in your shade 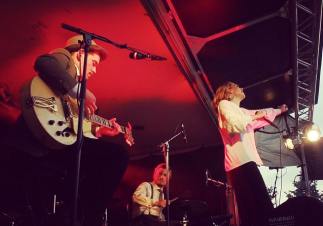 Thank you, Napuefest, thank you Isokyrö! What a beautiful event, what a beautiful weather, what a beautiful audience, we had such a good time performing! A big thank you to the organisation and all the bands, The Valkyrians got us dancing so wild Laura’s shoes were completely shattered. Overwhelmed and overjoyed! We’re going to have a small practice break, but already in September and October we’re going to have several shows with the entire dandy band AND the fabulous Armi Von Vep, so keep your eyes peeled and follow our social media!

Film Noir at Pastis, once more with feeling!

Today is our last Film Noir evening at Ravintola Pastis, and what a time we’ve had there this year! This has been a wonderful experience which has included all of our favourite things in life – great music, fabulous food and fantastic people. Once more, with so many feelings! See it on Facebook. 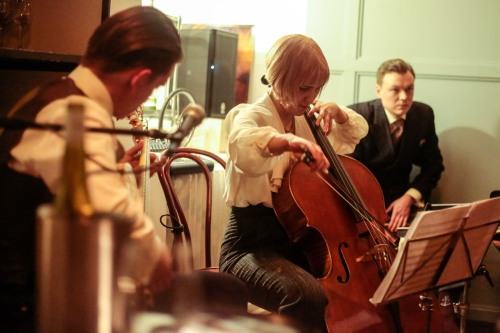 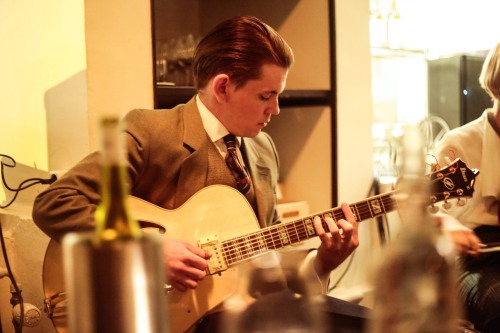 Filed under Is This Casablanca?, Live performances, News

Fabulous news for the Fall, Sweethearts!

Imagine an evening at your favourite French bistro, sitting down with an old friend, sipping champagne and pastis. Imagine your favourite band playing in the corner. Imagine closing your eyes, and opening them again at Café Americain, next to Hoagy, Bogey and Bacall. We did, and this is what happened:

We are happy to announce ‘Pastis goes Film Noir avec Café de Abejas’, a series of Show & Dinner evenings at Ravintola Pastis, Helsinki! With a special dinner menu by the chef, and two sets of golden era Hollywood music by yours truly, these are promising to be the wonderfullest tiny shows we’ve done so far! Of course the songs will be arranged for our peculiar tastes, and of course there will be some of our own Casablanca thrown into the mix as well.

The evenings are going to be very intimate, with only 30-odd seats reserved for each evening. The tickets are on sale as of this morning, and they are selling FAST! So Sweethearts, tout de suite, get your seats here: http://www.tiketti.fi/Pastis-goes-Film-Noir-avec-Cafe…/34126

Have a wonderful week, and see you at a gig, darling dolls!

Lyrics and a New Video!

A lot of you Sweethearts have been asking us if we could put our lyrics up online. So, there is now a page titled lyrics under the music tab of these pages! The videos have also been moved under the same tab – and we just added a live video of “Waiting for the Roses” to the videos page! Enjoy!

Here’s a link to the lyrics!

It’s been a week since the release party at Andorra, and we’re feeling absolutely exhilarated! The old movie theatre was packed, and we had a blast, and people were enjoying themselves, and the guys at the bar were short staffed but happy about the turn out and everything just went exceptionally well. And! We managed to get some decent video footage for a change, so expect to see a few live videos soon. 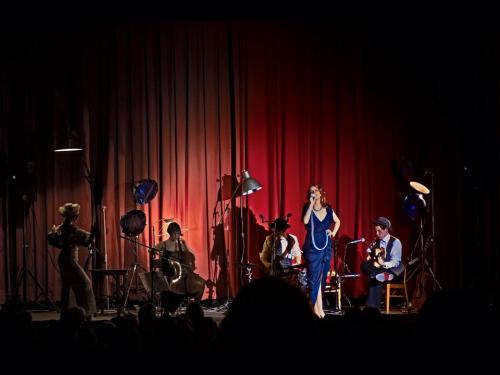 So, the CD is out, yes it is! You can listen to the album below (the whole thing of course!) and buy a download or a CD at our BOUTIQUE. The album will also be available at the precious few CD stores left in Helsinki, and is hitting Spotify, iTunes and Deezer this week. For international orders, order through the BOUTIQUE or contact us directly.

Oh! A few darling bloggers already got whiff of our shenanigans! Kujerruksia went to the album release party and loved it (In Finnish). Glue wants you to listen to Zaza (In English).

Happy New Year, Sweethearts! It’s 2015, and it’s almost two years since we released Mascot Moth. During those two years we’ve played around Europe and Finland, arranged an all-night concert with video projections and performance art at one of Helsinki’s most established venues, grown together as a band and, as a result, written and recorded a new album. Where 2014 was mostly about planning and executing the Savoy gig (spring) and putting together the new album (autumn), this year’s gonna be all about playing gigs again! 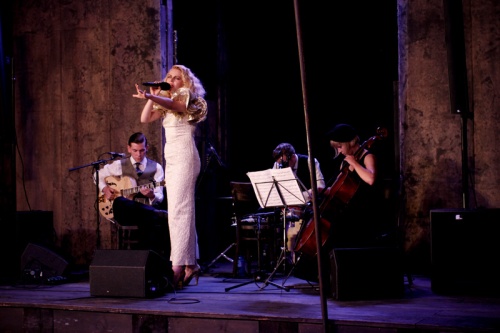 Although we’ve played a lot of shows and private functions during the last few years, with wonderful bands and for wonderful people, there’s only been a handful of concerts we’ve arranged by and for ourselves. Those have been the ones with aerial hoops and jazz dance lessons and burlesque and cocktails and cabaret and stuff. Those are the gigs we want to make! And the new album, Is This Casablanca?, is just full of stories and film noir and cabaret just waiting to be played out and acted on stage.  It will all start with the album release party in February.

We just love doing this!

The above being said, we also love just getting intimate as a duo, and playing obvious and not so obvious cover songs for great crowds! So, as a Swedish gentleman once put it, “More is more!“. We’ll definitely focus on doing Shows – yes, with a capital S – at nice locations (with the lovely performer in the above picture!) for you, but there’s always great bands to play with and great venues to spend lovely evenings at, and we absolutely can’t say no to that!

Our first gig of the year is on January 9th at Semifinal, Helsinki, with the amazing Valo. We’re really happy to play with them, and a little scared too, because their vocalist actually sometimes gives us singing lessons. For me it’s just an evening with two absolutely superb singers backed by two absolutely wonderful bands on the same stage! So come see the show and hear the new songs and discover VALO, if you haven’t yet.

A wonderful new year to all of you lovelies out there,