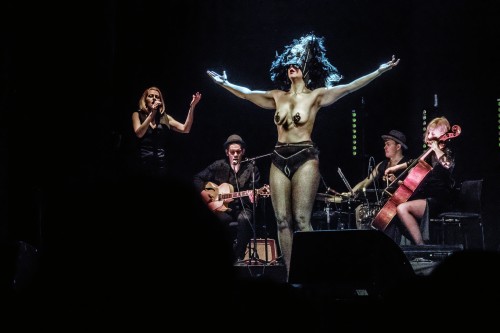 Imagine Tom Waits and Edith Piaf dancing tango in a Weimar-era cabaret, and you have an idea of what the music of Café de Abejas is about: The Helsinki-based, chanson/cabaret dandy band is dedicated to decadence. A unique cross between Hollywood glamour, chanson vulnerability and silent-film madness, their theatrical performances and sophisticated songwriting have charmed indie-lovers, metalheads and opera fans alike. In the words of a listener: “It’s rather like being immersed in absinthe.”

Café de Abejas was founded by songwriter couple Laura Reunanen (vocals) and J. W. Ralli (guitar, vocals) in 2010. They were joined by Ilari Launonen (percussions) and Saara Viika (cello) in 2012.

Emotive storytelling is central to the songwriting of Jere and Laura, whose lyrics echo English poetry from Lord Byron to Dorothy Parker. The stories they tell are often witty, always decadent but seldom happy: Women drink Sazerac for breakfast (and for tea), men never come home from wars and one man’s sweetheart is another man’s whore. 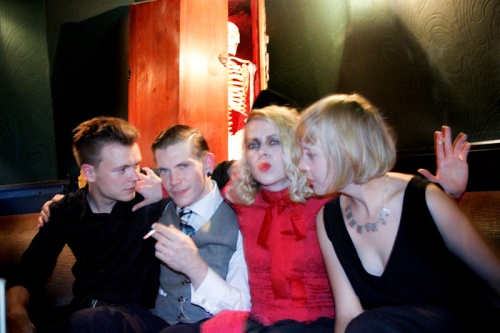 Livegraphy released Café de Abejas’s debut album Mascot Moth in February 2013. They have since performed in Finland and Europe, notably Germany, and supported artists like Julia Marcell and Sam Baker. The band’s music videos are produced on a wine budget and shot and edited by Laura and Jere themselves in a true DIY spirit.

In May 2014, Café de Abejas premiered their first miniature cabaret KAMMERKABARETT in Savoy-teatteri, Helsinki. The show, built around the band’s music, brought them together with burlesque and performance artist Armi Von Vep, who has since added a surrealistic performative twist to selected Café de Abejas concerts.

Is This Casablanca?, the second Café de Abejas album, was completely fan-funded via the Finnish crowdfunding platform Mesenaatti late in 2014. It was released by Livegraphy in February, 2015. 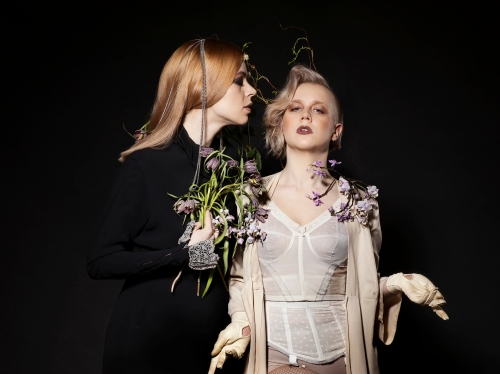