To conclude the first week of the advent calendar, here’s a recipe to a drink that was thrown together for our Independence Day after party No. 1 (Yes, we had another afterparty much, much later on!). It’s customary in Finland to gather around with friends and tune in on the Presidential Independence Day Ball, or Linnanjuhlat, as it is known in Finnish. It is a party that collects together a respectable amount of people, from popular entertainers, distinguished academics and athletes to politicians, military figures and WWII veterans. We had a friend over, who was looking forward to spending the Independence Day with his parents, only to find out two days before that his parents were actually attending the Presidential Ball. So, after our gig at the HKTY, we sat down to watch the Ball on TV, and we whipped up this surprisingly Mediterranean drink. Let’s call it

Shake all ingredients well, and strain in to a cocktail glass. Garnish with a twig of Rosemary. Double straining is recommended, but this is an afterparty drink, after all. 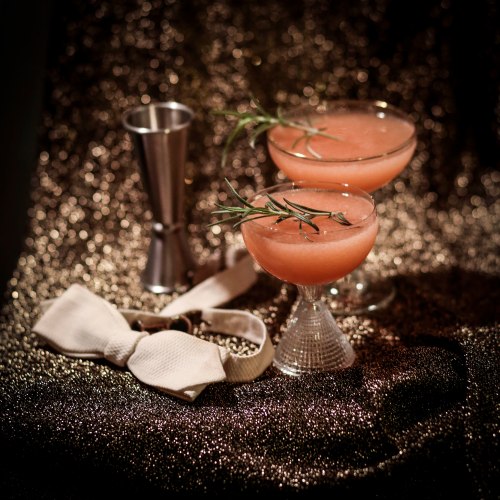 Made as such, the rowanberry jam makes the drink’s consistency lusciously thick. The Larios 12 has in it, apart from all the other spices, lime, orange, orange blossom, lemon, tangerine, mandarin, clementine and grapefruit. Together with Grand Marnier and grapefruit bitters, this drink has in it almost everything from the citrus family. The rosemary highlights the bright notes of the citrusy flavours, and Grand Marnier brings out the more mellow tangerines, clementines and mandarins.

Consider substituting the gin, since even without the Larios 12 the recipe still has a good amount of citruses in it. For the true Finnish Independence Day feel use Napue Gin, by the very Finnish Kyrö Distillery Company.

It’s Finnish Independence Day! We played some music at the party at Helsingin Käsityö- ja Teollisuusyhdistys, and had a lovely time! Here’s just a quick video to say hi!

More Film Noir inspiration, this time it’s all about hair! For the classic 1940’s look, nothing is more essential: Sure, the defined eyebrows and a popping red lipstick go a long way towards vintage glamour, but without the hairdos and the talented hairdressers behind them, Rita Hayworth’s first scene in Gilda would have a lot less of the nonchalant charm that so defines the character. Besides, what would happen to Lauren Bacall’s “The Look” without that wavy hair under which to glare?

This is why, for the 5th of November, we have put together a Pinterest board full of Noir hair inspiration for all lengths and styles! There are even a few vintage tutorials you can try for one of the parties of the festive season: There is nothing better than a wavy hairdo to help you channel the great icons of our century!

I have sported big waves à la Hayworth before, for example on our album cover, but for the intimate evenings I like a more demure, Bacallesque style. Before our Film Noir gigs in Pastis, I always go to TS-Salonki for my hairdo in the morning. We use heated rollers instead of pincurls, as my hair is super thick and I have to make it to the soundcheck in the afternoon. When the hair is set, I just wrap my hair in a silk scarf which I only take off just before the concert. Here are some selfies from different evenings of the fall (also check out Saara’s new haircolor and cut!): 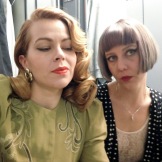 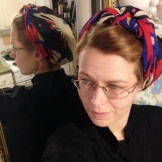 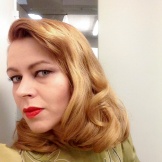 And here’s our shot at Why Don’t You Do Right, Jessica Rabbit style. This is the first rehearsal take with the whole band, from way back in September. Saara actually downtunes the C string on the cello, to get some of that upright bass feel to the song.

For the past four months we’ve been doing a Film Noir themed Show & Dinner set at Restaurant Pastis in Helsinki, and we’ve listened to a lot of songs from a lot of movies. So behind the third door of our Advent Calendar lies a playlist of some our favourite Film Noir songs.

A few interesting notes. In the “Rita Hayworth” songs Amado Mio, Put The Blame On Mame and Please, Don’t Kiss Me, the singing voice is actually that of Anita Ellis, an American singer and actress. The people at Columbia Pictures needed to turn Rita Hayworth in to an icon, and while her husky, deep voice was perfect for acting, her singing was always overdubbed. In fact, the only song Rita ever sang for herself on screen was the solo guitar version of ‘Mame‘ in Gilda. All three songs were also written by Dorothy Fisher, one of the very few female songwriters of Golden Age Hollywood.

Hoagy Carmichael is known to many as a prominent songwriter and a marvelous performer. In the later 1930s he was even hired by Paramount Pictures for a whopping 1000$ a week. He also played Sam in the TV production of Casablanca in the 1950s. Did you know, that Ian Fleming has said James Bond would look like Hoagy Carmichael, only with a scar over his face?

David Raksin‘s instrumental song Laura, from the movie Laura (1944), became so popular that Johnny Mercer was asked to write lyrics to it, and 5 different recorded versions emerged in 1945 alone. It has since become a standard with more than 400 known recordings, by Ella Fitzgerald, Frank Sinatra and Julie London among others. The song is also heavily referenced to in the movie – the score is almost completely comprised of the theme, the song plays on a phonograph, a band plays the song in a restaurant scene, it is heard as background music in a party, and the song is even on in the radio – at which point Vincent Price‘s character tells us it’s “one of Laura’s favourites.”

The song Why Don’t You Do Right was originally written in 1936 by Joseph McCoy for Harlem Hamfats, and was called The Weed Smoker’s Dream. Lil Green made a recording of the song with new lyrics and a refined melody. Peggy Lee, a big fan of Ms. Green’s work, made the revised version of the song famous after Benny Goodman heard her listening to it on a record over and over again, and offered to arrange it for her to sing. Hugh Laurie recorded a version of the original Weed Smoker’s Dream with Gaby Moreno on vocals in 2013.

On the Second day of Christmas my true love sent to me two gold bugs.

The Kissel Speedster, commonly known as Goldbug, was produced from 1919 through 1927, and during that time it was a very popular car among the celebrities. Jack Dempsey drove one, Douglas Fairbanks drove one, Greta Garbo drove one, Mary Pickford drove one. Even Amelia Earhart drove one. It was also featured in quite a few movies, and our favourite scene is in the short film Jonah Jones (1924). Apart from the car, we adore Dorothy Seastrom in the role of Margaret Morgan.

The below rendition of the Gold Bug is Jere’s handiwork, designed for an animated music video. We’ll tell you more about that in the future. 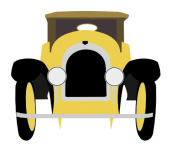 So, Jere & Laura went to this wedding this summer. In the capacity of the Best Man, Jere also designed the cocktails for the reception, and so many Last Words were had at this particular party! The newlywed couple surprised us all by getting the absolutely amazing Atelieri O. Haapala to make sure the Steampunk themed event was properly documented for generations to come! 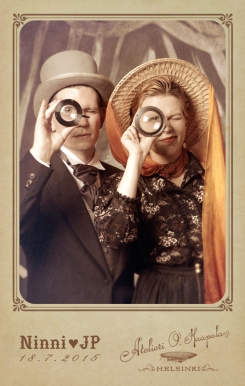 One response to “Advent calendar, week 1”