This part of the studio diary will be a little different. I’ll tell you a little about our recordings in general, and a little bit about all the other stuff we’ve done while we’ve been recording.

As you might know by now, we started recording at the beginning of October at Lil’ Yellow, a cottage located in Western Finland Province. It’s an awesome place to be, especially in the autumn, when it’s not too cold to go mushroom hunting out in the forest, and yet the leaves have already turned a hundred shades of yellow and orange (especially the maple trees!). We spent a week at Lil’ Yellow, just Me, Laura, Saara, Ilari and Juha, our recording engineer – we sometimes refer to him as The Record Company, especially when he buys a round. During that week we recorded seven songs live, out of the 12 tracks that are to appear on the forthcoming album. You can read more about the details of the week from the previous Studio Diary posts. 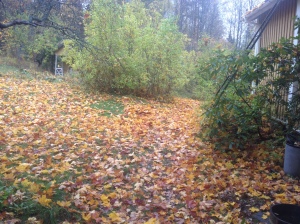 After the week at Lil’ Yellow, we took a week off and visited Tampere for a gig at Lost in Music. After the Tampere leg, me and Laura took a ferry to Tallin and stayed there for a few days, mostly wandering around the city and stumbling in to a cozy café or a restaurant once every few hours. One of the places we happened by was a nice little student café, where, as we entered, three people were sitting at a table taking turns on Ukulele, the barista gave us a small cup of freshly ground coffee beans used in our coffee just to smell, and it took us a better part of an hour to realize that what we took for comic books on the shelves were actually volumes of christian literary and that all the music videos that they were showing on a screen were gospel songs from revival meetings. The place is called The Living Room, and it serves kick-ass coffee.

A Scrabble moment with the band at Lost in Music.

Jere getting cosy in Tallin. This guest house was b e a u t i f u l.

After Tallin and Tampere we relocated our studio to Ruoholahti, Helsinki. We also started a crowd-funding campaign for the album. And the busy bees we are, we were able to not play more than three gigs during the last few weeks. The last one we actually ran to from the studio, leaving Saara and Juha to go over some cello parts while Laura and I took the chance to perform few of the new songs live, first time ever. We also played a wonderful show at a care home, bringing some burlesque to the elderly with our amazing muse Noora. It was the resdients’ wish, when asked for what kind of activity they were looking forward to. I was told the exact phrasing was “gambling, cocktails and nudity“. A prohibition themed party for the people who actually remember the prohibition – now that was something. “In Paris they took ALL the clothes off!“, as it was aptly put by a gentleman after our show.

Laura and Noora having a cigarette break.

Armi Von Vepp on stage at the care home.

So we haven’t actually recorded non-stop for a month now – the total of studio days is closer to two weeks, give or take.
Some days have been shorter, and more frustrating than others, as is usually the case. Some of the frustration is technical, some not so. Helsinki is a funky place to be a singer in the winter time – the sheer amount of sharing of favourite remedies ranging from tea-with-honey to taking a salt room session going on in the singers’ scene is amazing. And you will catch a cold. And it will take you a better part of the spring to get over it. We’re on the winning side, right now, fingers crossed, knock on wood, that sort of stuff. We diligently take our vitamins, and there has been a lot of rum involved.

Our vitamins, from 1956 with love. It’s actually a bottle for silver nitrate from the soviet era, and judging by the amount of the bottles, it were used for photogrpahy.

Even in the city we keep getting treats like this!

So right now we’ve five songs ready, and most of the remaining songs only lack in minor details, harmonies, toy piano, smoky laughter of the muse, and such. There’s a song, though, a duet which I wrote about three weeks before we started recording. It’s not exactly giving me nightmares yet, but there’s plenty to do. I might need to devote a whole blog for that song only. On the other hand, there’s a brand new tune called Zaza on the album, which was written two days before the studio, and which we arranged in one afternoon, so… the other song might magically just fall in place all of a sudden (although my guess is sweat and tears).

Laura behind the wheel. 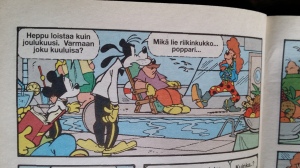 “This guy’s decorated like a christmas tree. Must be someone famous.” “More like a peackock… A pop star…”

And oh, a short word on the percussions! You might have noticed that Ilari’s drum set with Abejas is not the most conventional one. He uses a padded bass drum pedal with a cajon, two tambourines taped together as a ‘snare’, two cymbals but no hi-hat and various shakers and zils and a frog shaped guiro. For Kammerkabarett he also used a trash bin. For the last album he recorded a typewriter. This time he hopped on the morning bus carrying a crowbar, which by the way makes the second most industrial sound I’ve ever heard – the most industrial would be the industrial metal press that ended up on the album of my other band. Well, anyway, the crowbar was a cool thing, but as it happens, the houses surrounding our Helsinki studio are having their metal roofs recoated, which means there’s heaps of old steel plates lying all over the place. Not exactly bell plates, but they make do for a kettle drum! And then there is the match box.

That’s all for now. Tune back in soon!