It’s been a while since the last studio update. We’ve been quite busy with gigs, recordings and other stuff, most notably with the Finnish showcase festival Lost in Music and it’s ‘seminars, cocktails and free form mingling’ counterpart Music & Media. 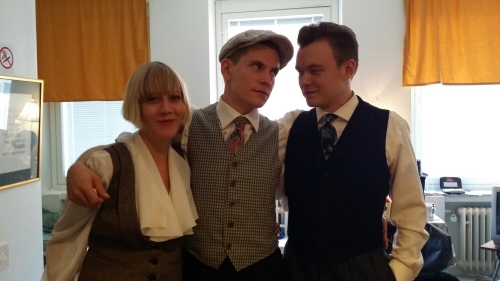 After coming back from the Lil’ Yellow, we established our base in the city at the ever moving Livegraphy studio. As I’ve previously mentioned, this time we’re doing more overdubbing than on the previous album. I’ve added some guitar tracks here and there, even *gasp* distorted guitar. And I’ve still managed to play more songs on an acoustic guitar than last time. Ilari has once again played wacky percussion sounds along with his usual not-so-usual stuff.

Today it’s Saara Day. There are a few harmonies and ambient sounds for Saara to add on existing tracks, and a few new songs we’ve started the work on in the city, with some guest musicians on board. Saara does most amazing stuff on this album, and I can’t wait for you to hear it.