We’ve reached Epiphany, in Finnish called ‘Loppiainen’, which traditionally ends the Christmas time and is a public holiday. In contemporary thought, by Loppiainen you should really have run through the Christmas leftovers, and started concentrating on those ‘new year, new life’ resolutions. We don’t make those. But we have had an excess of about everything during the holidays, so January’s cocktail recipe is based on what is reputed to have been the favorite digestif and cure-all of both the Queen Mother and Queen Elizabeth II.

Recently Laura and I have been stocking our personal bar with fun stuff,  eau-de-vie de poire being among the lot. We’ve also been experimenting with Dubonnet, trying it out in the Bijou, the Negroni and such. We also tried the classic Dubonnet Cocktail, or Zaza, as it is also known. Although it was the favorite daily tonic for a few queens, and while gin does mix with anything, Zaza, in our humble opinion, leaves something to wish for. A Bentley, for example, when using good Calva works better.

Searching for more recipes for Dubonnet, I stumbled upon a rather strange version of the Diabola on the web page of a known Swedish vodka brand. This version had gin, Dubonnet and Pear eau-de-vie (see where this is going?). I call the Swedish version strange, because the Diabola, as it appears in Harry Craddock’s The Savoy Cocktail Book calls for gin, Dubonnet and orgeat syrup. Now neither one of these sound like they have anything to do with the Devil. The latter, possibly originally made with Old Tom or Genever, is probably very sweet and perhaps more angelic than diabolic.

I was intrigued, however, by the idea of mixing Dubonnet and the pear brandy. I was also fixated on the name the creator had chosen for the drink. For the while I thought I was making a Diabola with a twist. I wanted to add something to the mix that would make it more devilish in taste. 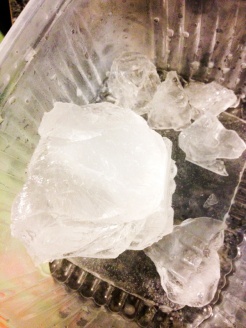 So I went through our bitters and our spices, and thought of introducing chili in to the mix, but luckily decided against it. I also discarded bitters, since I didn’t really want to introduce more flavors or destroy the balance between the pear and dubonnet – I rather wanted to find something to tie them together. I was getting the feeling that I was looking for something specific – I could almost taste it, but couldn’t quite grasp what it was. That is, until I picked up an empty bag of allspice. I knew I wanted to use pepper. But black pepper would be too strong, white would not work either, and rosepepper would introduce too much flavor. At last I picked up a bag of green peppers, the one variety I have the least experience of. The aroma was rich but not overpowering, and the taste was rather fine, almost non-existent.

As I started making the drink, I realised I was not making a Diabola at all – losing the orgeat syrup kind of takes us back to Zaza. So, while making this seasoned Zaza, I started wondering about the name Zaza (I was having a very name oriented day!) and it’s possible origins. What I discovered was two American actresses and one play. The actresses were Mrs. Leslie Carter, known as the ‘Sarah Bernhardt of the US‘, and Claudette Colbert, once the highest paid actress in Hollywood and the leading lady of Paramount for two decades. And the play? Zaza, a story of a prostitute who becomes a music hall entertainer and the mistress of a married man. The play was written in 1890s by the French playwrights Pierre Berton and Jules Simon, and made in to an opera by Ruggero Leoncavallo two years later.

At this point I knew I was absolutely making a Zaza, in homage to the ladies Carter, Colbert and Zaza and the music halls and cabarets of Paris.

Place a few uncrushed pepper pods at the bottom of a chilled coupé glass. Stir the drink with ice and strain in to the glass.

Don’t bother double straining – the few crushed peppers that might end up in the glass just add to the taste. Also, don’t overdo the pepper – you want to create a strong spicy scent, but you don’t want the drink to become unpleasantly ‘hot’ or peppery.

One response to “January Cocktail: Two Divas and a Play”